“Indigenous languages in the global village, more than just a case of survival” 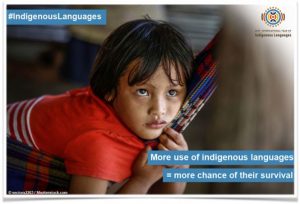 Greater use of indigenous languages means a greater chance of their survival. Losing a language is more than just losing words, it is a loss of unique cultural perspectives and narratives contained within the language and culture, along with its contribution to the richness of diversity.

Translators bring cultural narratives alive as they convey them to a wider, cross-cultural audience. The UN International Year of Indigenous Languages highlights the need to promote and protect indigenous languages and the rights of those who speak them. Translators, interpreters and terminologists play an important role in this mission.

Interpreters of indigenous languages give native speakers a chance to fully participate in cultural and political life of society and offer equality of access to basic services such as health care, education, information and justice in their mother tongue. Equality of access, along with freedom of thought, expression and personal opinion, are freedoms enshrined in the Universal Declaration of Human Rights and the UN Declaration of the Rights of Indigenous Peoples.

Indigenous languages embody the world’s cultural diversity. The complex systems of knowledge and culture developed and accumulated by and through indigenous languages over thousands of years are not at odds with the knowledge economies as we know them today. Diversity, in all its forms, promotes superior economic growth and outcomes for all. Indigenous languages provide intergenerational transfer of intangible cultural heritage and knowledge that will assist us in facing future global challenges.

Their disappearance would deprive us of their rich diversity and the ecological, economic and sociocultural contributions they make to society.

In 2017 Translators, interpreters and terminologists achieved an historical milestone as the 71st Session of the United Nations General Assembly unanimously adopted Resolution A/RES/71/288, recognising the role of professional translation in connecting nations, and fostering peace, understanding and development. Collectively, through their day-to-day work, language professionals support and maintain linguistic and cultural diversity, and raise awareness of the intrinsic value of indigenous languages and indigenous peoples.